Back In The United States of Applebee’s! 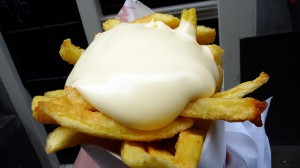 We, unfortunately, had to go to a restaurant last night, because we were run out of our house due to a situation we now refer to as the Great Septic Tank Eruption of 2013. I’ll soon have an entire post dedicated to this subject because sewage partially flooding the ground floor of one’s house is an endless source of mirth and hilarity. I will point out though, that the situation wasn’t my fault, so even in the smelliest, most disgusting disaster that can affect the average American today, I have my own little personal little ray of sunshine.

Anyway, so we went to our first average chain restaurant since we got back to the States, mainly because we needed sustenance. Here in Colorado Springs, if you want to eat out, chances are approximately 75-1 that it will be either a chain restaurant or fast food. By the way, the chain wasn’t Applebee’s despite the post title, but something close enough that you’d be well within your comfort zone if you were a dedicated Applebee’s fan. Which would be sad on a number of different levels, but far be it from me to judge.

We ordered a starter to share, because this was how it was described. And the dish was indeed, sized to share, if you were allocating it between some seven or eight very hungry people. A few months out of the country and you really forget how huge the portion sizes are here in the States. We had the nachos, since the one time we saw nachos in London they had chipolatas on top. We admire the thinking outside the box this represents but declined to try that particular version because, really, no, just no.

Literally five minutes after we got our starter, our entrees arrived. I think, even for a chain restaurant in the States, this might be shaving it a little close.  At some point a few minutes after we got to the entrees, after finally giving up on the nachos, the waiter wandered by and asked if we’d be looking forward to some dessert. We stared blankly back at him, because, and I can’t reiterate this enough, we had taken no more than a couple of bites of our entrees at this point and approximately seventy percent of the nachos were still unconsumed.

Wisely, the waiter concluded that we wouldn’t be having any dessert and wandered off to return a minute or two later with the bill, which he plopped down on the table and then ran off, not to be seen again for the rest of the meal. Which evens out since up to this point he had he’d swung by every three or four minutes to ask how the food was. Along about his seventh or eight visit I contemplated replying to his query that the food tasted pretty much the same as it had four minutes ago, and four minutes before that. But I refrained. One wonders if there were flavor layers in the dish that changed radically as one works their way down. Or perhaps the particular entree I ordered was only really good at a temperature of 125 F, and once it falls below 100 degrees, it suddenly turns to sawdust and nail clippings.

I didn’t even notice the bill was on the table, since I was concentrating on consuming my meal, and not as interested, at that time, in paying for it. And now I’m going to have to go back to calling it the check, since it took me outwards of three months in England to get used to calling it a bill. In Europe, you have to flag your waiter down and ask for the bill at the end of the meal, mainly because they have no problem encouraging one to linger over their coffee and conversation at the end of the meal for as long as one wants. Here though, we are trained to gobble the food down, pay up and get out as quickly as possible because the restaurant needs the table for the next set of customers, and you can digest the food just fine sitting in your car on the way to the mall as you can in the restaurant.

On the other hand, since chain restaurant ambiance seems to consist of cheesy rock music and wall to wall big screen televisions broadcasting endless sporting events, I’m not really encouraged to stay anyway.

So that was our welcome back to the United States of Chain Restaurants. I’m thinking of booking a flight back to London. Still, one does get enough food for the next three meals and at a price that would typically get you a single sausage and a dollop of mashed potatoes back in ‘Ol Blighty. So there’s that. Yay?