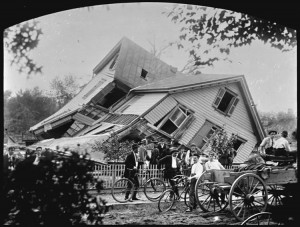 There used to be a, well let’s call it a social contract, between the generations. The previous generation would pass on their hard won knowledge (much of it gained around the fire from their elders) to us, their children, and we would pass it on to our children. This doesn’t happen all that much anymore. For instance, my Dad never taught me how to camp in the woods, and catch small game, skin it, gut it and char it over an open fire till it was a charcoal briquette, bury it, and have the sandwiches Mom packed for just such an emergency. I can, however tell you how to pilot a C-130 into a jungle airstrip while under enemy fire. This is information that is surprisingly, not as useful as one might think. Along with all the other bits and pieces of life experience I seemed to have missed out on, is the information on what specifically one needs to do to keep one’s house from collapsing into a mass of reeking rubble.

Through trial and error, and it’s running around 87% error, I’ve learned that you need a rolodex (though this is in electronic format nowadays, progress marches on) of maintenance and repair people. Septic tank guys, house painters, plumbers, drywall people, electricians, and on and on. This week’s addition to the directory of people who can repair all the things I cannot repair are the lint people. Well that’s what I call them.

We had to call in the lint people, because Mary got a bee in her bonnet about the lint piling up in boxcar sized quantities in the duct attached to the dryer. I don’t know what she was doing wearing a bonnet, but we have been living out in what could, to a New Yorker, for instance, be described as the country. Or maybe it’s a new trend, I have a hard time keeping up.  Anyway, and leaving the poor bee behind for the moment, Mary decided what I needed was an apparatus for scouring out lint ducts, so she got me one. An early birthday present, I presume.

After a lot of heaving and puffing, clutching of the chest and saying, “no, no, it’s okay, the pain will pass in a minute”, I got the dryer moved away from the wall and accessed the lint duct thingy. The vent cleaner jigamabob went in about two feet and came to an immovable obstruction. This became even more serious when I went outside, and looked for the vent outlet. Which, I deduced, was located on an exterior wall, because it was directly in line with the dryer, if you stood way back and squinted and didn’t pay much attention to geometry. With the dryer running I couldn’t feel any exhaust air coming out, so this of course meant that the duct was plugged up with dryer lint, which would in the next couple of hours almost certainly burst into flames, probably while we were asleep, even though it was the middle of the day, and the dryer wasn’t actually running at the time, and kill us both. Mary is a firm believer in the worst case construction of potential probabilities. At that point, a Google search was conducted, because the rolodex had no entry for dryer lint removal, and our new lint removal handyfolk were found.

They came out as soon as the latest spring blizzard had passed, and promptly informed us, or more specifically me, that the vent that I was checking on the exterior of the house was for the bathroom fan. The actual lint duct vent was on the roof. Which is pretty much par for the course. This year, so far, and it’s not even half over yet, I’ve learned that septic tanks can freeze, stuff bubbling up through the drain in your furnace room is a bad thing, and the smallest amount of drywall work in the farthest corner of the house will result in white dust coating everything for weeks. And this is where I come back, full circle to the poor job the last generation did in gifting us with the knowledge of the tribe, Specifically, that a good septic tank guy is worth more than his weight in rubies. And there are people who do nothing but remove lint from ductwork.

Oh, and for the record, the ‘obstruction’ was because the ducting had come loose, which necessitated cutting open the wall so that they could reconnect the ducts, and vacuum out the lint that had piled up inside the wall. And now we’ll have to have the drywall people back out to repair the wall, which will mean that everything will be coated in white dust for weeks, and then we’ll have to get the painters back out, and while they’re at it, it’s time to repaint the whole upstairs, since we already had the downstairs repainted last winter. You know, when I think about it, possibly our ancestors might have been a little better at passing on to their descendants the knowledge that living in a cave isn’t all that bad. Not bad at all.