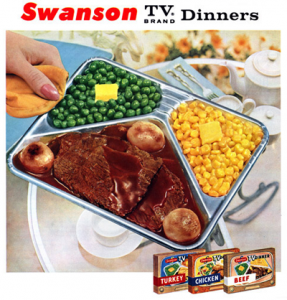 TV Dinners. Ah, such a nostalgic moniker. Just like the term moniker itself, a word nobody under the age of ninety uses, unless it’s in an ironic manner. Since I’m not ninety, not even close, really, let’s just assume that I used it ironically, kay?

In the run up to the Chicken Pie-alooza, I did a bunch of research about TV dinners. Partly because the Internet is a vast warehouse of knowledge and information, but primarily because if I wasn’t doing research, I had clothes to fold and recycling to sort. That’s my story and I’m sticking to it.

What I discovered was this: In the late Forties, a company was making frozen meals in trays and selling them to the Air Force and various airlines as Strato-Plates. Which would have been a pretty cool name for frozen meals. Alas, they never sold them commercially, however, which is why we aren’t all sitting there in front of our microwaves waiting for the Strato-Plates to finish cooking. Then around 1950, Quaker State Foods, which may or may not be related to Quaker State Oil, purveyors of fine automotive lubricants, marketed a brand of frozen meals in three compartment metal trays under their One-Eye Eskimo brand. No real information seems to be available about the One-Eye Eskimo brand, which might actually make a more interesting post. As it is, we’ll just have to wonder on the reasons why someone would name a brand One-Eye Eskimo, and move on. Another company marketed a line of frozen meals called FridgiDinners, but fortunately, we were spared having to call our meals that because of Swanson.

Swanson in the mid-Fifties had overestimated demand and ended up after Thanksgiving with a couple of hundred tons of left-over frozen turkey. Looking to unload the poultry overload, they come up with the idea of putting it in metal trays and selling ready-to-eat-after-reheating meals. More importantly, they come up with a name – TV Dinners and a national ad campaign. Thus tying in their frozen offerings with that hot new trend of the Fifties – television!

While I was researching stuff I learned some neat stuff I had either forgotten or hadn’t known in the first place. Did you know that at one time there was something called Swanson Three Course dinners where soup was included? This pretty much blows my mind! Mary says she remembers the versions including soup. 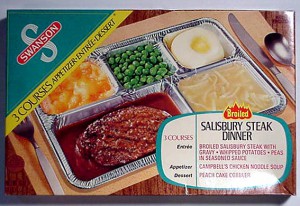 Also, there was at least one meal, with a cold appetizer course, which could be separated and eaten while the rest of the meal was heating up in the oven. 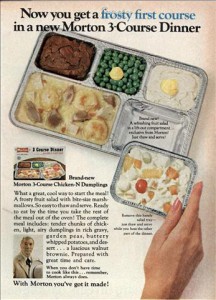 And the early advertising was pretty sexist which was par for the course at the time. Most of it seem to be related to the theme that Mom or the Wife has been dilatory in making a delicious home cooked meal, but don’t worry! There’s a frozen TV Dinner just waiting for you! And look! Mom (or the Wife) is perfectly turned out in designer clothing (with gloves) and looks fantastic! 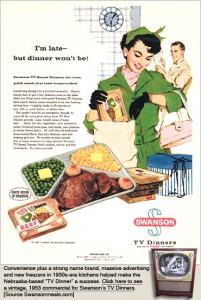 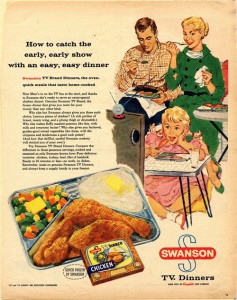 Perhaps when serving dinner, I should put on a jacket and a tie, and maybe a string of pearls, so we too can revisit those halcyon days of the mid-Twentieth Century.