Posted on February 3, 2012 by Michael Waring 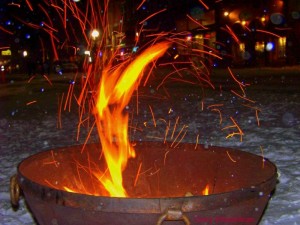 Since we moved here to the wilds of Colorado, amongst the crystal clear skies and clean piney scented air I have developed a bit of, well, not really an obsession. More like a thing. Like, when you find a place that sells really good Thai food, and you go back a little more frequently than you normally go to a restaurant, like every week or so. Not quite to the point where people start sniffing the air when you enter a room, trying to figure out where the curry smell is coming from, but close. So not really a passion, just something that you do more than once in a blue moon, or on the third Thursday in months that have an F in them.

I like to make fires and then sit in front of them. Not a fire in a fireplace, inside, all warm and snuggly, with a glass of a solidly decent cabernet. No, I mean fires built in a fire pit, outside, in sub-arctic temperatures, or if you’re very, very lucky, during or immediately after a snow. Where it takes me longer to get on all the cold weather gear than it takes to build up the fire in the first place. A lot of the fun is in the building of the fire. Starting with some newspaper, adding twigs and pine cones, then building a little pyramid of larger and larger branches, all in an attempt to see if I can make a fire, from raw materials, just like they did back in settler days. Though with a barbeque lighter. Which settlers totally would have used, if they had access to a twenty-first century industrialized supply chain.

So after I get my fire lit, I like to sit in front of it, sip some coffee, and think little thoughts. Fire gazing, I’ve come to the conclusion, is not conducive with deep thinking. It works better with small things, like whether the roast chicken I served last night might have been better with thyme sprinkled on the outside before roasting, and why is it that everything in life that is bad for you tastes so wonderfully great, like crispy chicken skin and Thai curry.

Mary will go and enjoy the fire with me, once or twice a year during the fall or spring. My fire thing, however, sitting out on nights where the temperature plummets to single digits, or when it’s snowing, my thing, I do alone.