As the clock winds down to the two week mark, I’ve started obsessively (I do seem to use obsessively and obsess a lot) going over the contents of my pack. Take the stuff out of the pack, look at it, ponder whether or not I need this item or that item? Or do I need some more stuff?Wouldn’t that piece of equipment give me peace of mind in the case of a statistically very unlikely event? Or hey, look over there, something really shiny and high tech, and I must have it, even though I don’t really know what it is, but it’s sooo cooool! I haven’t gotten to the point where I’m actively considering getting the mini-espresso maker yet, but I’m getting perilously close. 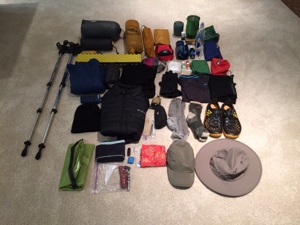 Submitted for your consideration (in my mind, that’s intoned by Rod Serling), I present the optional, yet seemingly semi-obligatory, equipment display photo. Look at it, in all its glory! Everything is there, well, mostly. In the picture, I am missing the electronics, because they won’t be in the pack till the day I step foot on the trial. So add an iPhone and an iPad, plus charger, and a supplemental battery back-up. And the A.T. Guide. Of which I will carry only the first half, at the beginning of the trail. But otherwise, the photo shows all the gear that will be in my pack when I set off on the next great adventure. 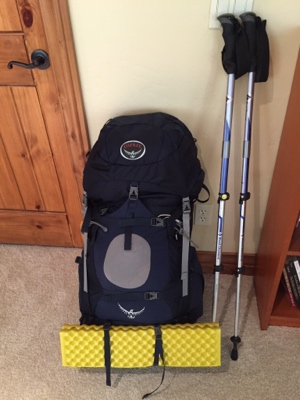 It’s bigger on the inside

There are some minor items that I’ll be carrying in my pockets, that are not shown. Like a bandanna, sunglasses, wallet, lighter, Swiss Army Knife and so on. I suppose I should have included them in the gear photo, but by the time I thought about them, I’d already packed it all up again. So instead, here’s a picture of the backpack all packed up. Note, in an earlier post, I did say I was striving to keep all my gear inside the pack with nothing hanging off. Well, I forgot a last minute addition, and that is the foam sitting pad. I cut it down from an old sleeping pad, but it’s still too bulky to fit inside the pack. I may still do some trimming on it, because it’s still a little bigger than I need, and it’s something else I can fret over for a while.

This entry was posted in Appalachian Trail. Bookmark the permalink.