Musings on Mexican Food in the Pacific Northwest 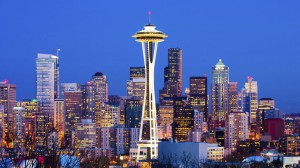 We’re up here in the Great Northwest, for a period of indeterminate length, on business. The business thing is Mary’s reason for being here, I’m just along to sample the bounty of the Seattle area, which is rich and diverse. Plus, they have beer.

I don’t think anyone would ever describe Seattle as a mecca for Mexican food. According to a scienterrific survey I did of long time residents, consisting exclusively of my in-laws, I can state with positive assurance that finding good Mexican food up here is difficult. But that’s as it should be. With the abundance of wonderful seafood, fruit, fungi, and dairy products available to Seattlites, it’s only fair that they should give up something in return, and it appears they picked Mexican food. There is one sort of local fast food Mexican chain, Taco Time, but the best that could be said of it is that ………

According to long time inhabitants that include, but may or may not be limited to my relatives by marriage, the only thing locals normally order at Taco Time are the crisp burritos and the Mexi-Fries.

But Michael, you say incredulously, how can a burrito be, ‘crisp’? Why the whole point of a burrito is that you take meat and rice and beans and other exotic flavorings, put them in a soft warm flour tortilla, roll it up and voila! Hand held south-of-the-border goodness! It’s soft and tasty! Not in Seattle, my friends. In Seattle, they wrap the fillings in a tortilla and then deep-fry that sucker. Because here in America, everything is better if you deep-fry it, except well, pretty much everything we deep-fry.

I could not bring myself to try the deep fried burrito, because sometime, somewhere you have to draw a line in the sand, and say, there and no further! That line, of course, being before the deep fried burrito but after the Mexi-Fries. Mexi-Fries seem to be an exclusive development of Taco Time. I was intrigued. Before trying one, I imagined that a Mexi-Fry would be a member of the French fry family, albeit with exotic spices and flavorings from down Mexico way. Something with a Sonoran flair perhaps, or an Oaxacan beat. As it turns out the Mexi-Fry is a Tater Tot. Not essentially a Tater Tot, or mostly a Tater Tot, or primarily a Tater Tot. It is one hundred and one percent pure Tater Tot, with no adulterants or additives whatsoever. It’s the most white bread side order possible.

In fairness, the Mexi-Tater-Tot-Fries were perfectly acceptable. I mean, how difficult is it to make a decent Tater Tot? I would have said the same thing about the humble taco, but apparently one can screw that up if one uses tasteless meat, limp and unappealing lettuce and tomatoes, and industrial grade cheese product (at least 5% real dairy products), and dump it all into a tortilla with all the flavor and appeal of a piece of cardboard. Let’s just say that the Mexi-Fries made up the majority of that particular meal, and leave it at that.

As of this writing, Mary has scheduled a trip down to Anaheim, ostensibly for business, but the truth is she’s going in search of a decent tacqueria.