The first two nights we spent at the IceHotel, we slept in a regular, warmly heated, queen bed equipped Scandinavian hotel room. The whole sleeping in a room made of ice is only for one night, and indeed they don’t recommend anyone try this for any longer period. Which is understandable, the bathrooms for the ice rooms are in a different building, which you have to go outside to get to, and at my age you have to plan on visiting them a few times a night, and that’s if you didn’t have seconds of the lingonberry juice at dinner.

Overall the standard warm rooms were fine, since all we did is crawl into them after a long day night of snow centered activities, take a shower and get some sleep. You might feel like sleeping a lot more above the Arctic Circle, since it is dark like nineteen hours a day. But, no! You must grab a snowmobile and go do some more Lapland stuff. Like feeding reindeer, and riding reindeer sleds, and other reindeer games.

First, a little primer about reindeer. If you just saw the Disney movie, Frozen, then you should watch this YouTube video of Let It Go. Great tune isn’t it? But on to my point, if I ever really had one, which is that you probably noticed that a reindeer is prominently featured in the movie. Reindeer in Frozen seem to be quite happy towing around an enormous heavy sleigh. Real reindeer don’t seem any too ecstatic about towing any kind of sleigh around. Indeed, they seem to be rather discontented about it. Our experience of reindeer sleighing (which isn’t a word, but let’s just pretend it is), consisted of jumping on a board, to which they’ve attached some rudimentary runners, and then holding on for dear life as the reindeer takes off like a bat out of hell. For around a hundred yards, and then they’ll slow down, because, hey, you’re kind of heavy, it’s warm (well, for Lapland it was), and man, you really are pretty heavy, you know? But the reindeer will pick up the pace again if they throw a second reindeer and sled on the course, because reindeer don’t like getting passed by other reindeer, much like drivers in Southern California. 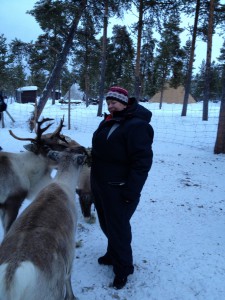 …and the woodland creatures all adored the Princess.

Anyway, reindeers aren’t as cute and cuddly as they look like in Disney flicks, nor are they particularly pleased to have to haul your fat butt around. They will lavish you with attention though if you feed them snow moss though. Personally, I don’t see the appeal of snow moss, because, if you’ve eaten one lichen you’ve pretty much tried them all, but reindeer are mad for this stuff.

So after another rustic meal, though this time in a teepee, which I’m sure is called something different in Sami, we sped back to the Icehotel, at unholy speeds on our snowmobiles, and prepared ourselves for the ultimate experience, sleeping in one of the ice rooms. They look something like this. 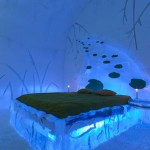 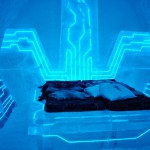 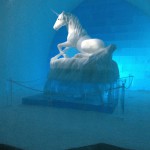 What more can I say?

The highest end rooms are called art rooms, in which famous and not-so-famous artists from around the world have come to create their art, in ice. So if you always dreamed of sleeping in a artwork, and who hasn’t, then come to the Icehotel. Besides the art rooms there are a lot of standard rooms, sans art, which aren’t too different than a room at home, except with ice walls, floors and furnishings. Plus a giant unicorn statue in the foyer, but then a lot of people have those. 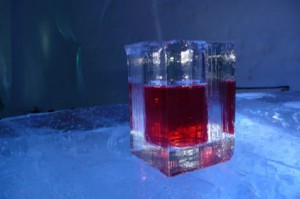 But first, cocktails, because, you can drink them in a bar made of ice, from glasses made of ice, like this. Not everything is better in ice, but a case can be made for cocktails.

I was really looking forward to the experience of sleeping in an ice room, on a bed made of ice, because, if it ever comes up in conversation, well, you automatically win, right? I mean, at a party, someone else might be talking about how they spent a week sleeping in an over-the-water bungalow in Bora Bora, and then you drop the ice room bomb, and everyone wants to find out what that’s like, and Mr. Bora Bora visibly deflates, and eventually wanders off to stand around the dip bowl, and tell other people who just want a scoop of crab dip, how they once swam with thousands of colorful and exotic fish. Reading this just now, I sound pretty shallow, which is well, not even a little inaccurate. But at least I once slept in a room made entirely of ice, so I have that going for me.

Well, first, let’s get it out of the way and just say, sleeping in an ice room was every bit as awesome as I thought it would be. Second, it sucked to a degree that it is hard to put into words, but exceeds by a considerable margin, the time I had to attend a fundamentalist Southern Baptist wedding. Almost as soon as we arrived in Lapland, I started coming down with a cold, and by the last night, the night we were supposed to stay in the ice room, I was coughing continuously and my nasal passages were free flowing snot dispensers.  And bad as a cold is when you can sleep in a nice bed with mattresses, sheets, and blankets, not to mention a bathroom which is not a couple of hundred feet away, it is really a great deal worse when you’re supposed to be sleeping in a room kept at 23 degrees F, in a sleeping bag, on a block of ice. It was pretty miserable. But I toughed it out, so I could say I did it, and because there was no way in hell I was ever going to get Mary to agree to come back. Just remember that when, I sidle up to you at the dip bowl at a party and start telling you my story about sleeping at the Icehotel. I suffered for it, man.