After a few days in Stockholm it was time for our real adventure, a flight up above the Arctic Circle and three days basking in the frigid gloominess that is Lapland.

To start our Laplandish quest we were scheduled to be picked up at the airport and taken to the hotel by dog sled. That seems pretty cool, because it’s just not that often you get the chance to travel by dog sled. Now, Kiruna, where the IceHotel is located, is pretty small, more a village than anything. So we expected, that in the nature of these types of things, we would get on a dog sled, they’d run it in a circle for ten minutes and we’d be deposited at the front door of the hotel. All done. This is not what happened. It turns out that the hotel is not close to the airport – not close at all. The dog sled ride took something like 45 minutes of hardcore tundra mushing and after the first ten minutes we could have been easily convinced to get out and walk. 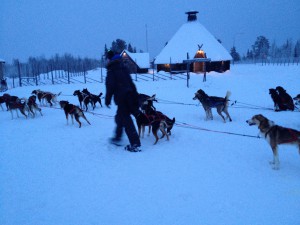 They never mention the smell in the movies.

There are a bunch of things they don’t tell you about dog sleds, in the movies, which was the sum total of our exposure to them before this trip. One, the dogs do all their barking while they’re waiting for you to get moving. Once they’re running, they are completely silent except for a little panting. Two, sled dogs are super efficient. When they need to take a poop, they just do it while they are running. With eight dogs, this is a significant amount of dog poop. So you have that as a near constant smell. Three, the movies always make the passengers in the dog sleds look pretty damn comfortable, with lots of furs to bundle up in and such. That doesn’t happen in Lapland. They give you a snowsuit, and put you on the bed of the sled which is pretty much just a board. A dog sled doesn’t have any springs, which you’d think, well, why would they? But, instead of gliding smoothly through the snow, you are running down a trail that snowmobiles also use, and they leave all kinds of bumps and such, so rather than glide peacefully through the snowy forest, your sled is cresting little hillocks and bumps and then slamming back down. Forty five minutes of that puts some significant stress on one’s spine, especially if you’re our age. By the time you finally arrive at the hotel, we needed a strong drink and a soft bed to lie in, preferably at the same time.

Needless to say, while we’re not totally unhappy that we experienced the non-delights of a real honest-to-god dog sled ride, we will not, ever, in the future be signing up to repeat this particular activity. 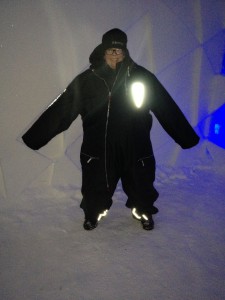 The legs alone were at least two feet too long.

This picture illustrates the snowsuit that the guides thought would best fit Mary. I started calling her my little Oompa Loompa, which prompted her to get a new, slightly better fitting snowsuit as soon as we got to the IceHotel. This did not however, stop me from continuing to call her an Oompa Loompa, right up until she dumped snow down my back.

The next day dawned bright and sunny, or probably did back in Colorado, but in Kiruna the gloom brightened somewhat around ten in the morning. Since it’s full dark by three, you spend most of your time living with artificial light. Given that everything is covered with several feet of snow, you also spend a lot of time watching where you put your feet.

On the second day, there was a trip out to an authentic hunting camp where a hotel chef would prepare the gourmet fare that Lapp hunters normally consumed. Okay, not really. There was also some ice fishing, which turned out to be as uncomfortable and boring as I expected, but fortunately you are in Scandinavia where wireless access is a birthright, and available in even the most remote locations, so I was able to at least check my email. The food was quite good, the first in a near endless number of variations on reindeer dishes.

To get to the ice fishing and fine dining experience, we were expected to ride snowmobiles out to the camp. Here again we see the difference in Swedish attitudes. In the US, a group would be transported out to the site by van or bus. If you wanted to ride a snowmobile that would be an optional activity, available only for additional fees. There would also be a couple of hours of training mandated by the state, and a lengthy legal document to sign, protecting the resort from any kind of damages. In Sweden, they give you a helmet, tell you that if you hit something with the snowmobile, you’re responsible for the damages, and give you literally sixty seconds on instruction on how to drive a snowmobile, and then tell you to saddle up, or whatever Scandinavian phrase that means saddle up.

I found snowmobiling to be somewhat exhilarating and pretty much non-stop terrifying. Especially if you push it up to over fifty kilometers an hour which every one else wanted to do, because they have no proper sense of mortality. I ceded the driving duties to Mary as soon as I could as she’s much better at this than I am.

Now picture it with a terrified husband clinging to her back.

And here’s my little snowmobiling mama. A phrase that will no doubt result in some more snow in my Jockey’s.