Posted on February 7, 2014 by Michael Waring

We have returned full circle, back to Los Angeles and America and apple pie, as well as excellent fish tacos. Hmmm, fish tacos….

Before bestriding the globe, hurtling through the stratosphere back to the City of Angels, we stopped off for a few days of relaxation in Singapore. Our intention was to spend those days hopping from one hawker stand to another, but Mary’s sprained ankle put a bit of a crimp in those plans. She sprained her ankle while debarking less than gracefully from a boat in Siem Reap. Mary did say I could go on without her, sampling the manifold delicacies of Singapore, but I knew this to be a test. If I agreed with her, and went off on own, I would be an unworthy husband, and she would hate me forever, even if I brought her some leftover chili crab. Or maybe because I brought her leftover chili crab. If, on the other hand, I remained by her side for her every waking hour I could earn brownie points. Plus, someone had to be around to replenish the ice pack and fluff pillows, and good help is expensive in Singapore. 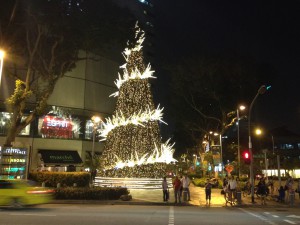 Anyway, while in Singapore, we discovered that they have decided to appropriate Christmas in a big way. I mean a really big way. This is a Christmas tree outside our hotel. 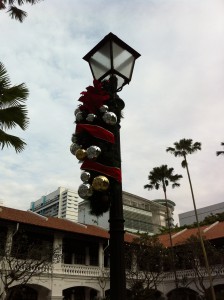 I expected imported snow or something, but even Singapore draws the line somewhere.

Here are some additional decorations. Considering that the total number of Christians in Singapore is less than 20% of the population, I’m guessing they just want in on that good old holiday cheer. I mean who doesn’t like Christmas gifts and turkey? 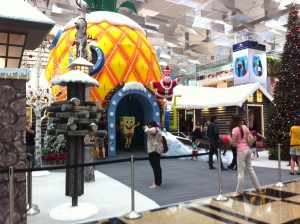 Weirdly, not as popular as the Santa Hut next door.

And then there was the whole SpongeBob SquarePants Christmas themed décor. Which, you know I can on some level understand, because Christmas is inclusive and whatnot. But what we couldn’t get our heads around was the accompanying Roman themed displays?!? 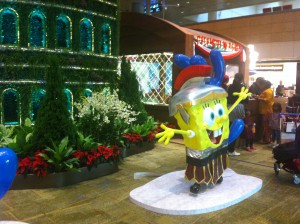 That, by the way, is the Coliseum, behind SpongeBob, but of course I didn’t need to explain that! 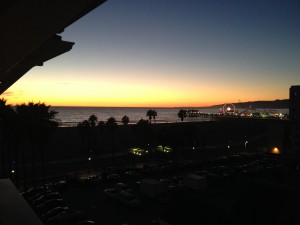 Yes, I missed out on the hawker stands, but at least I got a corn dog at the Santa Monica pier.

Finally, we returned to the good ol’ US of A, and a view west over the mighty Pacific Ocean, which I will not have to fly across again for another three months.

Next, icy doings in Lapland!