Posted on February 3, 2014 by Michael Waring

So we finally arrived at the one place I actually had planned on going in SE Asia, Angkor Wat. I wrote and erased a whole bunch of words about Angkor Wat, and none of them did the place justice. So I’ll largely let the pictures do the talking.

Around Angkor Wat (which is the name of the most impressive imperial palace and temple complex in the area), in the area of Siem Reap, which is the modern city from which exploration of the surrounding area is conducted, are seemingly innumerable temples. Many were lost in the mists of time, then rediscovered over the last one hundred and fifty years. Enough boring history. Short story – lots of temples, scattered hither and yon, some partially restored, some left pretty much as they were found. And without further ado, this is what we found, ourselves, well with the help of our trusty guides. Oh and here’s a shout-out to our tuk-tuk drivers, they didn’t kill us even once! 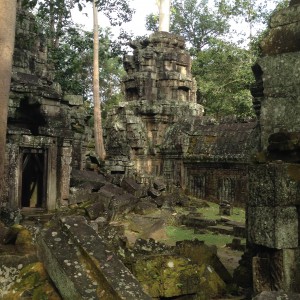 The groundskeeper should be severely chastised. 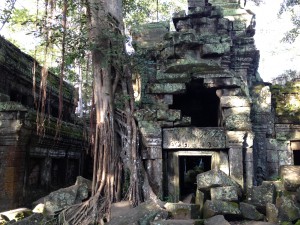 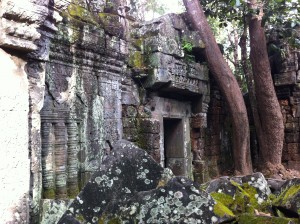 As you can see it’s been a while since the last temple ceremony. 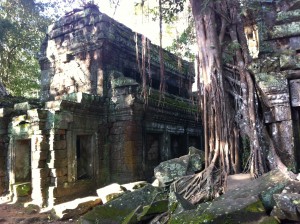 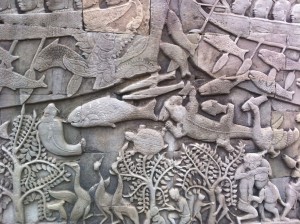 You gotta love this, big fishies and alligators dining on soldiers that fall off the boats during battles. 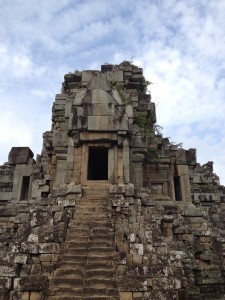 Mary twisted her ankle during this portion of the trip so it fell to me to climb all these. 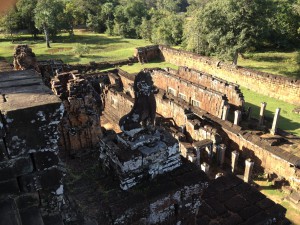 And I climbed the temples so I could get pics like this. 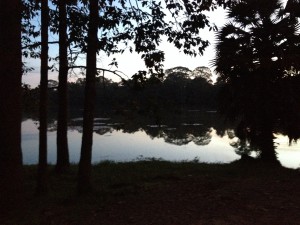 Looks peaceful, and spiritual, but that’s because you can’t see the clouds of bugs rising up at sundown.

When we got tired of climbing up, down, and around temple complexes, we took a relaxing boat ride on the Tonle Sap, an impressively large lake which waxes and wanes depending on the monsoon. There were snacks, champagne and then some more snacks, which I think is really the only way to travel around in boats. 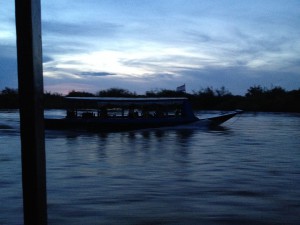 Sundown on the lake.

Our patio and private pool, we didn’t get to actually do more than jump in, dry off and then run off to see another temple. 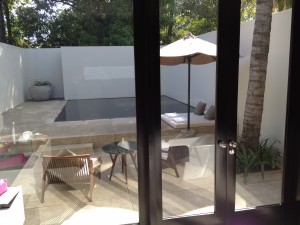 It looks very pleasant but you have to remember it’s 150 degrees F and the humidity is over 200%.