We thought we’d do Hanoi as more of a test, just to get a taste, see which way the wind was blowing, get our feet wet, that sort of thing. If in the process, I’m able to cobble together as many idioms as I did above, then it’s all good. They flesh these posts out, quite a lot, at times. 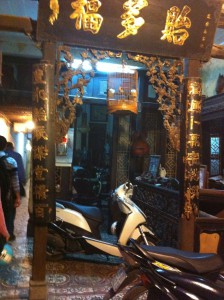 There isn’t much to say about Hanoi, except it has a certain old school French Colonial charm overlaid with an undeniable frenetic quality in which just crossing a street can be terrifying. I’m not certain, but I don’t think there’s a traffic light in the whole of the greater Hanoi metropolitan area, or if there are any, everyone just ignores them. Getting across the road to see what’s on the other side is quite adventurous, and if you wait around for people to come to a stop so you can safely walk across an intersection, you’ll still be there months later. 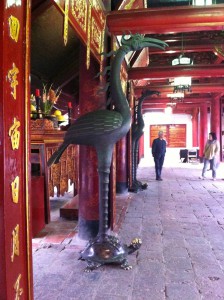 Either the stork signifies some sort of Confucian educational concept or it’s just hitching a ride on the turtle.

To see the sights we hooked up with an organization Mary found out about – HANOIKIDS. Basically, college age students will act as tour guides to show you some of Hanoi and it gives them a chance to practice their English. I’m not sure what this accomplishes to be honest, as the two kids we met had better English than 90% of Americans, but the important part isn’t about improving transnational ties or promoting cultural open-mindedness, but that we’re getting guided tours for free. The kids were great, by the way.

Afterwards, we spent a night cruising aboard a luxurious boat in Ha Long Bay. We’re glad we did it, since at the current rate of increase in the number of tour boats, there’s every likelihood that within another three to five years they’ll reach gridlock on the bay, and you’ll just be able to hop from boat to boat and sightsee that way. By the way, when I say luxurious, what I mean is that they had the very good grace not to sink, or run into anything, while we were aboard. This is the kind of thing you pay extra for. As there’s neither boat drills nor instructions for where to find your life jackets, this is strictly for people who are oblivious, or able to tread water for several hours. 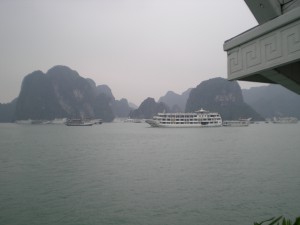 This is the least crowded view we ever got.

And that was pretty much it for Vietnam. We enjoyed it a great deal and would like to spend some more time in Hanoi in the future and explore it further. Ha Long Bay, not so much.