Along our way travelling around northern Vietnam, we also carved out a little time to sample some of the local beverages. 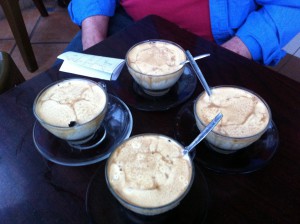 It’s one of those things that taste better than it looks.

This is egg coffee. Unlike its not-so-close cousin, the egg cream, it actually does contain both of the ingredients called out in the name (for the record, egg creams contain neither egg nor cream). Egg coffee is a specialty of Vietnam, specifically Hanoi. Flavor and consistency are strongly reminiscent of drinking a liquid marshmallow. I recommend trying one if you’re in town. I strongly caution against drinking two egg coffees at a sitting, as hyperglycemic shock is a terrible disruption to a meticulously planned trip. 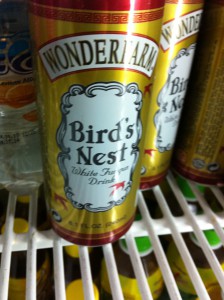 As far as I can tell it’s not medicinal, so I have no explanation for it.

I cannot say we equally enjoyed the other two drinks we encountered in Hanoi. Well, to be honest, we were too chicken to even try a sip of this White Fungus drink. I don’t know quite what a White Fungus is, but in United States of America, we try to avoid drinking anything that has the word ‘fungus’ in the description. It’s worked for me in the past, and I’m perfectly happy to continue following this precept.

We both did sample the Winter Melon Tea, though, alas, it was not what one might call a successful trial. It kind of reminded me of those times when there was a quarter glass of flat Coke sitting on the table, in which the ice had melted long ago, and you reached over, without looking, and took a swig of it, only to discover that someone had tossed their cigarette butt in the glass. Well, it was like that, only the Winter Melon Tea didn’t taste quite as good.

And for the record, I would like to point out that not one of the drinks I’ve written about this time contained even a trace of alcohol. I’ll try and correct that in a subsequent post, sorry.