As I write this, Mary is in the next room rattling a full cocktail shaker, a little specialness that will be awarded as soon as I complete this post. So to recap, we went to Laos, saw some Buddhist temples, ate a bunch of spicy food, and went for a ride in a boat. The end.

Ahh, apparently, a post has to contain sufficient detail to compile several paragraphs, though I have been reliably informed that the paragraphs don’t have to be long ones. It would be most convenient if someone were to publish the rules, so one knows where one stands.

When we last left our intrepid adventurers (yes, that’s us – we’re adventurers) they (or we) had completed the Thailand leg of the trip, and were off to Laos and Luang Prabang for further escapades. I’m not quite sure why we went to Luang Prabang, beyond the whole, “because it was there” and/or because we went just so we’d be able to say we had.

I think the main selling point for Luang Prabang, besides having an awesome name, was that there was also an AmanResort in town, and we’d been wanting to stay at another Aman since our first experience a few years ago in Utah. And the reports from other tourists were that the town was serene and pleasant.  We’re always up for serenity and pleasantness. 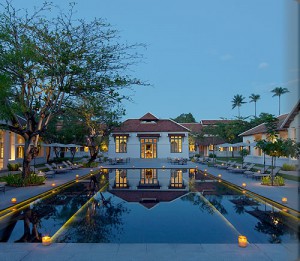 Yes, sure they used to house bubonic plague victims and lepers, but look at the pool!

We did tour some more Buddhist temples, a subject with which I believe we shall be quite conversant by the end of this trip. We’ll be easily able to point out the differences between viharas, stupas and chaitya grihas, and pontificate on the ineffable differences between the Theravada and Mahayana schools of Buddhism. I imagine people will start to turn around and walk in the opposite direction when they see us coming down the street in order to spare themselves another incredibly boring disquisition on the Four Noble Truths. 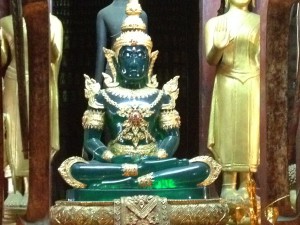 In just another temple.

The resort lived up the advance billing. Amantaka is built into a former French colonial hospital, a structure which makes a surprisingly comfortable hotel. Only 20 or so rooms, but it has all the amenities and most importantly, experienced guides for most of the area’s attractions.

We spent one evening riding around the Mekong River in a boat, with snacks, drinks and colorful commentary. Another evening we watched a demonstration of traditional Lao costumes and dances. And finally we did the aforementioned early morning street market and then spent the rest of the morning and early afternoon taking a cooking class after which we ate the food we prepared. Yeah, we did that – flew 8,000 miles, and paid the resort to allow us to cook our own meal. Well, at least we didn’t have to wash the dishes afterwards. 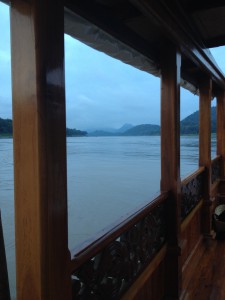 And not a Jetski to be seen!

And that was Laos.