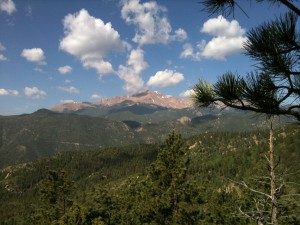 So yesterday, it stopped snowing for a couple of hours, and I decided to go for a hike. It was a glorious day, temperature in the fifties, bright and sunny, and just enough of a breeze to keep one’s cheeks the proper shade of rosy.

Towards the end of my amble through the piney forests I encountered a group of thirty or so fellow hikers proceeding in the opposite direction. This being Colorado, where apparently they put nice in the water, every single one of them greeted me as I went past, either a good morning (the majority), to a hearty hello, and, I believe, a singular,  “how ya doin’?”

So what is the protocol here? I mean, I know what to do in more formal occasions, like meeting the Queen (abase oneself on the floor, striking it repeatedly with your forehead in the hopes that you will finally be granted that Order of the British Empire you’ve always coveted). Or chilling with my Congressman (slip large cash envelopes into the hands of one of his flunkies, never hand cash directly to his Crookedness, so that he can protest that he was entrapped when the FBI indicts him).

But, when meeting a large group of people on the trail, who all want to greet you, and hug you, and be your best friend forever, I’m a little bit unsure of the proper etiquette. This situation is especially fraught for people who are a bit of an introvert, with a skosh of anti-social tendencies dressed up with a smattering of, almost certainly unwarranted, intellectual superiority. I settled for saying ‘Good morning’ to each and every one, but that just seems tedious and boring.

I thought about just ignoring them, but they’re all so nice, that it would it would be like picking them last for Dodgeball. I could have just grunted, or given a slight nod, as I passed each of them, but that seemed churlish. For a moment, I considered just saying “hello” to the first person in the group and telling him to pass it on, but at that point I was already even with sixth in line. My last and worst idea, which I didn’t have till I was back home again, was to swing off the trail as soon as I saw them so I wouldn’t have to make eye contact or engage in personal greetings. This seemed contraindicated as the only person on the planet that has less of a sense of direction than yours truly, is my wife. The last time I decided to go off trail, I spent the next seven hours wandering about in the backwoods till I found a road.

Better off, I think just to give into to social convention and say hello, even if it’s to every single person I meet on the trail. It means a lot less time lost in the woods.