Plays and the People Who Go To Them 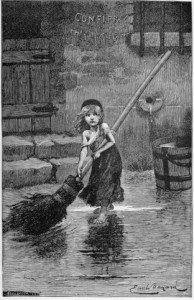 We went to the theatre the other night. Because that’s what you do when you live in London. Or that’s what we tell ourselves. Actually, truth be told I’d figure we’d go to the theatre probably once or twice a year, if we were really living here, rather than just visiting long term. That’s kind of what you do when you live in a touristy place. Like we actually live on Pike’s Peak, or so we say, since we live on a ridge that can very tenuously be described as being attached to the actual peak. Anyway, we’ve gone to the top of the mountain, probably once in the last seven years, all on our own and not in the company of guests. And that one incident was only because I climbed the mountain. On foot. Very, very slowly. And then walked back down from the peak, even more slowly. And painfully.

So anyway, we’re going to more plays then I think we would normally, mainly because we have all these visitors. We should be going more often because of our love of the theatre, or something like that, but have you seen the prices they charge for plays nowadays? It’s really quite insane. I’d describe it as an unsustainable business model, but the theatres are pretty full. Case in point – Les Mis, or Les Miz, or Les Misérables, depending on whatever level of pretension you like to maintain. Personally, we like very high levels of pretension.

Les Mis has been running continuously here in London since 1985. Mary originally saw a production many years ago, before I met her, when she lived a lonely and unfulfilled life, a time when only the briefest sparks lifted the gloom, such as a performance of Les Mis. That production was set on a stage that you could easily stage football games on with a cast of hundreds, or so it seemed. The stage featured a huge mechanism for the barricades and the street scenes that could easily have doubled for one of those cranes that lift shipping containers. We both saw the Les Mis some years ago, here in London, on a significantly smaller stage, with a cast of dozens and a smaller set of props. The other night we saw the same production, downsized again to fit in a much smaller theatre, with a cast of well, less than twenty, and a turntable in the middle of the stage so people could walk a lot (and they walk a lot in this play) without going anywhere. We figure by 2020, the play will be staged in a loft in Ealing, with a cast of three people and the stage props consisting of a kitchen table, and an empty bottle of Gatorade. And the tickets by then will cost $350 apiece.