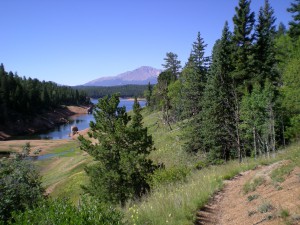 Two years after I set out, my quest for vengeance is now complete. The mighty mountain has fallen beneath my dusty boots. Well, actually, it’s still there, pretty much none the worse for wear, which is not something that can be said about yours truly. But, the important thing is I made it to the top of Pikes Peak, and thus another Fourteener is now ticked off the list. That makes four Fourteeners now. I get to count Mt. Whitney, even though it is in California and not Colorado, since it does exceed the required fourteen thousand feet height. And I climbed it, and as far as I’m concerned that’s all that counts.

What with one thing or another, such as roaring forest fires, evacuations, road trips and Mary’s peach pie, I had a hell of a time getting back in shape this year. I realize that this would not be necessary, if during the intervening winter, I made even a minimal effort to exercise, not to mention possibly rethinking that whole second-helping-of-potatoes-fried-in-duck-fat idea. So it took me right to the end of the summer before I felt minimally ready to attempt the ascent. At 6:00am on last Friday, Danny, a boon companion, and Jackson, faithful dog (whose faithfulness is assured as long as the Jerky Treats keep coming) assailed the mighty massif.

It was a beautiful day, as many are here in the Rockies, and if I hadn’t been trying to cough up a lung, I probably would have enjoyed it immensely. The vistas were stunning, and even though they are the same ones that people who drive to the top get to see, they are much more magnificent when gazed upon through a haze of near-terminal exhaustion and dehydration. Or so I tell myself. Oh, well, though the doing doth fatigue me mightily, the feeling when one steps upon the summit makes it all worthwhile. And there’s the most awesome freshly made hot donuts and hot chocolate, available for purchase on top. I think they should put a snack bar on top off all mountains, or at least the ones I want to climb. Great incentive. And even though the treats are deep fried, after climbing up to eat them they are, I can assure you, totally guilt-free.

Ten hours and thirteen miles later, not to mention a four thousand feet climb and even worse, a four thousand feet descent, we completed the hike. Now, three days later, I feel confident that I will not be confined to a wheel chair for life since, as of this morning, I finally managed to make it downstairs without once mewling like a little kitten. Another week or two and I’ll probably be able to put a pair of pants on without sitting down. Or taking a break halfway through.