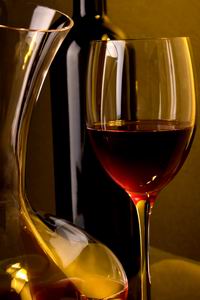 The other night I engaged in what was described as Boys Night Out, which could mean it was a meeting of the He-Man Girl Haters Club, but probably wasn’t, as we all love our wives a lot. Lots and lots. Anyway, the ostensible reason for getting together was to drink a lot of wine. And because we’re big deal he-men, the only acceptable wine is red, since real manly men drink red wines. If you invite the ladies, they’ll insist on drinking white wine, and that’s hardly manly at all, unless you’re eating a really nice sea bass with a beurre blanc.

You know, some years ago, we men would get together, watch some football and whip out our manhoods, which at the time were in the form of cars, and do some serious comparing. With men, size is always important (no matter what we might say to the world at large), whether it was cubic inches of engine displacement, or elapsed time from zero to sixty. There might be style points too, based on whether or not you had a shifter with a knob on the end that looked like a fist, or a steering wheel made of chromed chain links that was small enough that it could pass right through your chest with virtually no resistance in a head on collision. But these were strictly secondary. I imagine that these types of things still go on somewhere, deep in that section of the country that still wears John Deere hats, but in a non-ironic way. Where I’m at, though, we’ve moved on.

Today’s chest thumping, head butting displays revolve around wine and food. First the wine. You can get points for the most expensive wine, but that’s kind of regarded as taking a short cut. Like, back in the day, the guys who’d buy a Porsche, they were considered to be using money to substitute for real manliness. Or at least that’s what we’d tell each other, even as deep inside we’d be dying just a little, because we’d so want to have a Porsche of our own. And so it continues today, where you could bring a Chateau Mouton Rothschild Pauillac 1986, and you’d pretty much be the cock of the walk. But you’ll get more points overall for impressively obscure wineries and rare vintages. The perfect source would be a vineyard in a little valley up in the Santa Cruz Mountains, that can only be accessed by a rutted dirt road, and is so obscure that even satellites have trouble finding it. You have to email the owners, and they will reply only on the second Tuesday of the month, when they come into town to stock up on groceries and hit the wifi at Starbucks. Robert Parker gave them a 98 for their 2006 cabernet, and ever since there’s been a waiting list for the 230 cases a year they produce. If you bring a bottle of say, a 2010 cab, then you’ll have bragging rights for the next three months, till the next together, when someone will have sourced one of the original 2006 vintages, even though they had to sell their mint condition 68 ‘Cuda with the 426 cu in Hemi, to afford it, but hey, sometimes you have to man up.

As to the food, well, at the Boys Night Out, I scored a really great recipe for marcona almonds with truffle salt, which was simply fab, but in a very manly way. And the herb crust on the steaks, well, let’s just say, it was a testosterone drenched poem.