Posted on September 8, 2012 by Michael Waring 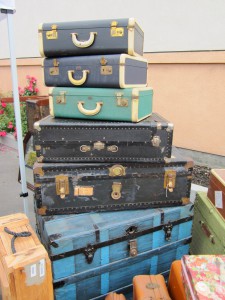 We are just a few weeks away from moving to England for three months, and I like to think of it as moving there rather than going on an extended vacation. I mean, sure it looks like a vacation, but we’re going to be doing our day to day thing just like we were at home, except with a bit more British flavour. Like spelling flavor as flavour. Things like that. Anyway, we’ve been discussing what kind of luggage we’re going to take, and the first pass looks like it’ll be something on the order of eighteen bags.

Like many Americans I get most of my information from movies, since reading is time consuming, and there are considerably fewer CGI explosions to enliven things. Movies can be quite informationally dense, if approached with a certain credulous attitude. For instance, from movies one learns that cars will usually explode in a fiery blast when involved in a crash. The chance for automotive incineration approaches certainty if you go over a cliff, often while you’re still in mid-air. So stay away from cliffs. You can just show up at the best restaurant in town, and still get a table on a Saturday night if you slip the maître’d a sawbuck. Hitting someone with a frying pan is invariably hilarious because it always makes a boooonnngg sound.

Most importantly, and hard as it is to believe, germane to this discussion, because somewhere, up there in the first paragraph, I was talking about luggage, I have learned that in days of old, people could be broken down into two groups when it came to travel. The first group took a single, small suitcase, in which everything they needed for months circumnavigating the globe could be packed. The second group, took steamer trunks. Strangely, the number of changes of clothing and accessories never seemed to vary between the two groups.

Steamer trunks. There’s something you just don’t see anymore, understandably. Of course, back in the days when steamer trunks were popular, you could probably hire your own stevedore for like a quarter a day, twenty cents, if you threw in meals.  So there was always someone available to move that monstrosity around. I’d love to show up at the airport today with a steamer trunk, and see what would happen. I fear though, it would primarily consist of a quick trip to a windowless room containing lots of uniformed people with blue latex gloves. Seems unpleasant.

And in the movies, not only could you carry the equivalent of the men’s department at Macy’s out on the road with you, but it would come out of the suitcase in impeccable condition. Take The Lady Eve as an example, which is Mary’s favortist movie of all time, so I’ve watched it a lot, even though not one single car is immolated during the film. Henry Fonda is the heir of a beer fortune (oh, that it were me!), and he’s been up the Amazon for months researching snakes, I think. Instead of doing the responsible thing, which would be staying home and managing all that beer money. Yeah, I had a hard time swallowing that too, but it was in a movie, so it must be approximately true. Anyway, he travels down the river and catches a cruise ship off the coast that will take him home. He’s been in the jungle for months, and that first evening he’s swanning about in a perfectly pressed and fitted dinner jacket (tux, to us Yanks). I’ll pack my tux and several hours later arrive on a cruise ship, take the garment out of the bag, and it looks like it’s been used as bedding by vagrants.

People in the movies would have one smallish hard sided suitcase, and pull out a couple of suits, multiple pairs of wingtips, shirts, ties, hats, umbrellas, overcoats, enough shaving equipment to outfit a fair size barber shop, and often, a bottle of scotch. With a couple of glasses. In my suitcase, I can fit three shirts, a couple of pairs of pants, socks, a few pairs of underwear, and a toiletry kit with contents miniaturized (travel-sized) so that it looks like it would be more appropriate for a six year old. And everything still comes out crumpled and creased. I must be doing something wrong.

So next month, if you should happen to be in London and observe a disagreeably disheveled man wearing one sock, a pair of oil stained dress pants, and a shirt that looks like a 3D topographic model of the Rocky Mountains, that’ll be me.