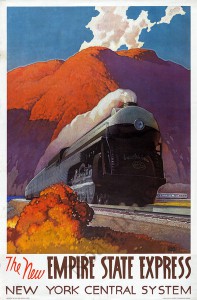 On our magical mystery tour to jolly old England, we’ve decided this time rather than using those new-fangled jet aircraft to fly over, we’re going do this totally old-school. We’re going to take the train to New York, just like they used to back in the Thirties and Forties. Except, instead of passing the time watching the scenery, drinking dawn to dusk, and smoking three packs of unfiltered cigarettes a day, we’ll have iPads, laptops, and smartphones to distract us. Possibly not as romantic, but definitely easier on the liver and lungs.

Sure, it’ll take us three days to get to New York, rather than four hours by jet. But we won’t have to take our shoes off, unless we want to, and no one is going to irradiate us or pat down our junk. And really, how effective is swiping the back of your hand across your crotch in determining whether someone is smuggling exotic animals in their pants? If I want to carry a pack of lemurs across country in my trousers, on the train it’ll be nobody’s business but my own, and the emergency room doctor that treats me for rabies.

From New York, after a couple of days taking showers in spaces slightly bigger than a breadbox, and to allow time for the kinks to unkink, we’ll take an ocean liner across the broad reaches of the Atlantic to the Old World. But that’s another story for another time. Since I have to come up with two posts a week, I need to space these things out.

I’d write about the difference between the trains of today and those of yesteryear, but since I never rode a train back then, my powers of compare and contrast are lacking. And writing about the difference between riding the rails and flying will have to wait till we actually do this train thing. So instead, I’ll just take a look at how the modern restaurant cars compare to those of the past. I have a deep and abiding affection for old timey menus. I could spend hours looking over them. And then I’d go out and eat an entire ham, or something similar, because that’s what they’d do back in the old days. Of course, back then they’d get up at dawn, work at some very strenuous physical labor for like nineteen hours, and then eat for another four and a half hours, after which they’d sleep for thirty minutes, and do it all over again. Which explains why the men would all die by the time they were thirty-four, and women (the five or six percent that hadn’t yet died in childbirth) would live to the ripe old age of forty-one. 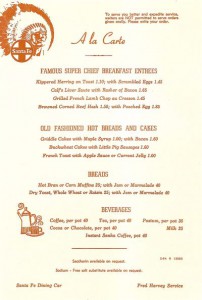 Anyway, here’s a menu from the old Super Chief, the train that ran between New York and Los Angeles. Apparently, the Super Chief was very popular with the celebrities of the day. I don’t know why I threw that in. Just another semi-useless datum.

I confess puzzlement about a few things on the menu. Like, when did Americans ever eat kippered herring on toast? Don’t get me wrong, I like herring in all of its endless permutations. The Scandinavians, according to a completely unscientific study I conducted, have around eight hundred and thirty-two different ways to serve herring, which Mary contends is eight hundred and thirty-two different variations on smelly fish. She seems to be biased, however. And then there’s the calf’s liver, and the lamb chops. All of these items seem to be the kind of thing that the British would eat. Americans nowadays, are firmly wedded to the belief that the only acceptable proteins, other than eggs, served at breakfast are pork products. Steaks, perhaps, once in a while, but only after a big time bender the night before.

Anyway, today’s train menus are lacking a bit in the sophistication department, if you ascribe to the belief that kippered herring on toast is classy. I do, but certain others, specifically my wife, would rather gnaw on moldy cheese rinds than partake of the noble herring. From the current menu, the best that could be said, is that there won’t be anything served at breakfast that has the slightest chance to offend.

So I managed to string this post out long enough that I fear I will have to finish it next week. I will add in however, an examination of the sociological impacts of vegetarianism on Mid-Twentieth century eating habits. Or maybe I won’t. You’ll just have to come back and see.