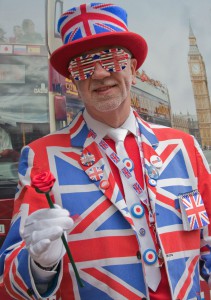 Plans continue to progress with the whole living in London for a while idea. We are now only weeks away. So along with picking up conversational British a la P.G. Wodehouse, I felt I also need to become a little more conversant with British words and phrases.

Looking over a list of British English terms and comparing them to equivalent American English expressions (in various parts of this country, also known as Real Amurriccan), I see only a few areas where there may be issues.

I’m pretty familiar with the most commonly used terms, like cellphone = mobile and ATM = cash machine. Chips in the US = crisps in the UK, while chips in the UK = French fries in the US. And of course, most importantly, takeout here is takeaway there, which when you think about it is a much more pleasant term, for reasons I cannot quite pin down. It just delights me.

A cigarette is a fag in England. Since I don’t smoke, I don’t have any need to check out the local tobacconist for a pack of smokes. Still, if I was a smoker, which I’m not, but if I was, I imagine I’d be pretty uncomfortable asking for a pack of fags. So it’s a good thing I don’t smoke. Well, except the weekly cigar, and that, thank god is something that is the same in Amurriccan English and Proper British English.  Plus, I can get Cuban cigars legally in London, so, score!

Here in the US, what we call a tank top, is called a vest in the UK, though I personally prefer the much more evocative expression – wife beater. A vest is quite a proper term, I think. In the situation where someone says, “Go over and give this to the fellow in the vest”, I know I’m going to look around the room for either someone in a three-piece suit, or Rick Santorum. Fortunately, since we’ll be in England in the fall and winter, it’s hardly likely too many people will be wearing tank tops, unless they’re wearing it as part of a three-piece suit, in which case confusion shall reign.

I do have to remember while in England that if I need to buy a pair of pants, they must be referred to as trousers, since pants in the UK are actually women’s panties. It being England, it probably wouldn’t raise too many eyebrows, if I requested a pair of pants, considering how many of their celebrities and politicians seem to get caught crossdressing, but I’d rather not draw attention to myself. Certainly not that kind of attention.

I can pretty much ignore auto related terms since we’re not going to have a car. So, I don’t care that the trunk is the boot and the hood is the bonnet. I should probably memorize lorry = truck as that could have dire consequences when I step off the curb, after looking in the wrong direction, and someone shouts, “Look out for the lorry” and it takes me a couple of extra fractions of a second to translate that in my head to American which would be “Hey asshole, look out for the freakin’ truck!” Still, in the several microseconds before I become smeared across the tarmac by five tons of Fortnum and Mason delivery van, I will possibly have an opportunity to smile a little internally, at the expression, lorry, and think ‘how quaint…”