I don’t spend a lot of time thinking about sleepwear as a rule, but a post on Boing Boing got the old grey matter percolating.

I like the idea of pajamas more than I like the actuality. I’d be keen to swan about in some nice silk sleep togs, with a swanky dressing gown on top, maybe with some posh slippers. But the reality is, that even in the coldest depths of winter, I sleep hot. And I mean, like a furnace, hot. Shortly after getting in the iciest of beds, I’ll throw off all the covers, and then any clothing I happen to be wearing. Some nights are so uncomfortable that I’d contemplate attempting to strip off my skin as it’s obviously not allowing my internal organs to properly breathe. So wearing a layer of silk or cotton to bed, is normally not something I find appealing. And flannel, well, you might as well just douse me in gasoline and diesel oil and light a match.

Even though I have quite a nice pair of sleep togs I find myself unable to wear them for 95% of the year. This apparently is not a problem for others. And I think it would behoove us (and by us, I mean of course, you ladies, since it has been established since time immemorial that men are incapable of properly dressing themselves without the intervention of the fairer and smarter sex, or a valet) to establish that there are some rules that should be observed. Perhaps some of the younger men out there are in need of a little instruction in the proper fit, form and function of sleepwear.

Pajamas are for sleeping. And lounging about in the morning when you’re entertaining a lady guest like Myrna Loy, or Audrey Hepburn. Like so:

And they should always be covered in the latter circumstances with a stylish dressing gown. A bathrobe is too common. Don’t go there. Pajamas should only be worn immediately before retiring and discarded no later than 9:00 AM. They should never be worn outdoors, except when an emergency dictates – such as when you realize that the garbage truck is two houses down, and you forgot to put out the trash. And even then, you should always, always, put on a robe before hauling the odorous remains of last weeks parties out to the curb.

Pajamas are never, not ever, for wearing out in public. No matter how much you need a tall refreshing Big Gulp, and no matter how comfortable they are. Like this guy. Dude, just no, dude. 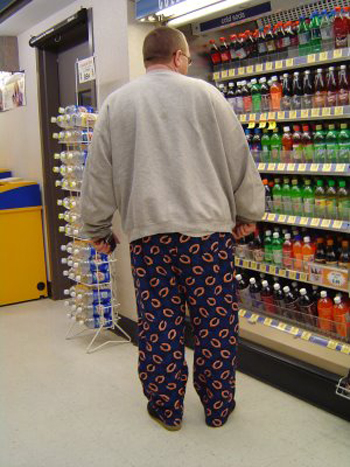 Dressing as a Greek god? No, don’t do that either. Fortunately, this, like many things from the past is now gone, and mostly forgotten, thank god.

This combo is only permissible if you’re cast in a remake of Ma and Pa Kettle Go To Town. No one under the age of one hundred and seventeen should ever wear a nightshirt. 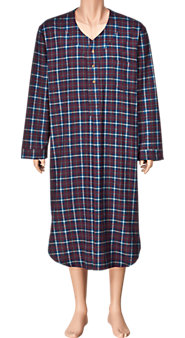 And again, to that guy, at the Seven Eleven, in Rule #1A, who almost certainly has a pair of these in a drawer back home. Again, no dude. Like, really, no. 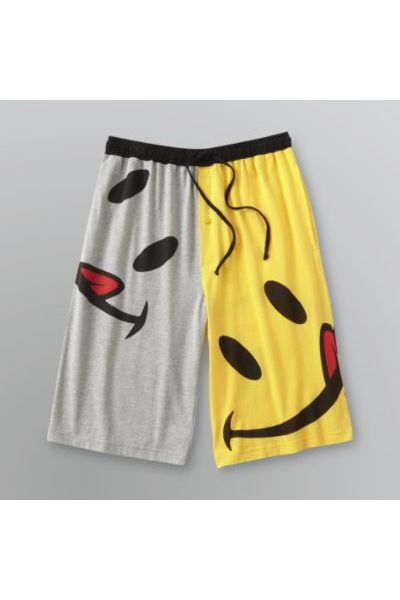 Spending your entire life in pajamas surrounded by brainless bimbos seems like a pretty cool lifestyle, when you’re 17 and your higher reasoning functions are continually shorted out by hormonal tsunamis. After that though, it just becomes embarrassing. And creepy. So don’t do that.

That bathrobe you found in your hotel room? It is for wearing subsequent to your shower, after a long day running with the bulls, or chasing a cat burglar over Parisian rooftops. It is not, ever, to be worn down to the breakfast buffet. Or to the bar, or the gym, or the lounge, or really any place but inside the privacy of your room, where I cannot see you. I would be perfectly fine with higher end establishments immediately calling a cab and ejecting offenders who break this rule. You’ve been warned.