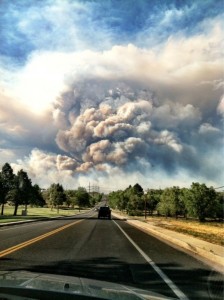 Last night we bugged out, made a run for the hills (well, actually we ran out of the hills), jumped the fence, and went on the lam. In short, we scurried like little yappy dogs with our tails between our legs.

This morning, we had a bite of breakfast while we plotted our day’s idleness. Being the first people evacuated has its benefits. We scored a hotel room right away, and now we see that the hotels both here and in Denver are filling rapidly. Much as I think staying at an emergency evacuation shelter might be good for our resumes as evacuees, Mary has a decided preference for regular showers and mattresses. I cannot find any argument with this stance.

So far evacuee life is not exactly the trail of tears that one normally envisions. The majority of our worldly possessions are back at the house, and not piled up precariously in the back of the family truck. We’re not cooking up some slumgullion in a tin can over an open fire, not least because they have prohibited open fires in central Colorado for the foreseeable future. And Mary doesn’t have to darn my last remaining pair of socks, much as the thought of her doing so would fill me with boundless mirth. We’re safely ensconced in a hotel in downtown Colorado Springs, which while not quite equivalent to a Park Avenue address, is still a damn sight better than a Hampton Inn on the freeway exit outside Backwardsville, Mississippi. There are multiple restaurants to patronize, some of them with actual non-steak entrees. And last, and most importantly, there’s an ice cream shop next door. Mary has proclaimed this officially the happiest place on earth, at this point in time, if we ignore the whole fire and evacuation and living in a hotel thing. We have enough clothes to last a week or more, depending on how careful we are not to spill anything or sweat on them. And we have wi-fi, so we can continue to avoid conversing with each other, and just send each other tweets or texts. Life overall, isn’t too bad.

I suppose we should pause a minute, and spare a thought for many of our neighbors who don’t have the advantages we have. We’ve insured our house, and the contents, to the hilt so we have little real concern about losing our stuff. It would be inconvenient but it could all be replaced. Although, I would be slightly bereft if my fighting robot action figures were reduced to a cloud of toxic smoke. We’d already done a large amount of digitalizing and portabilizing of our lives. Like scanning all of our photos, and uploading loads and loads of memorabilia and stuff into the cloud. We realize most everything we own can be replaced, and in the interim we have the resources to live comfortably that many don’t. And we also have family members that we like to imagine we can sponge off of, indefinitely. Hi, Steve and Carmen! Hi Don and Sarah! So, with all these advantages, it seemed like a good idea to give the Red Cross some bucks since in different circumstances, it could be us looking for help. Now back to talking about us, us, us.

Even though we did try not to go full metal jacket crazy on grabbing possessions on our way out, we do still have more stuff than will fit comfortably in a hotel room. Leaving it in a locked car seemed somewhat unwise so we opted for the option where we inveigle our friends to store some of it for us. Thanks Beth and Danny!

And that’s where we’re at as Day Two comes to a close. So far the fire has not caused any damage to buildings or injuries so we have that.

Oh, and the scanner is still safe.