It was Mary’s first Mardi Gras ever! It wasn’t mine.

Mardi Gras when you’re in your fifties is noticeably different than it was when you were in your twenties. And I’m not just referring to the lack of platform shoes, blow dried hair (or in my case the presence of any hair altogether), and 8 track tapes. All things that really aren’t missed and should be left in the trunk in the basement next to the battered cardboard box containing the tied-dyed shirts, Steppenwolf albums, and shoulder length hair from the Sixties. <shudder

First, hard as it is to believe, continuous drunkenness is a little harder to maintain once you wave farewell to the big 5-0. One benefit is that you remember more stuff. For instance, I distinctly recall driving down to Mardi Gras back in the day, and arriving back home afterwards. What happened in between is pretty much a blank. I am assured that a good time was had, however.

Second, when you go to Mardi Gras after you’ve reached your second half-century, you attend a couple of parades, and then you’re pretty much done. And after you’ve been to a parade, you don’t top the night off by stumbling from one bar to another in the French Quarter till the sun rises.

Third, it’s actually kind of pleasant not to end the night, at dawn, with a big heaping helping of Popeye’s fried chicken or some similar fare. Washed down with some more beer of course. Hard as it is to believe now, but once upon a time I could eat something like fried chicken, biscuits and onion rings, extra spicy, with beer, at five in the morning and suffer no discernible ill effects whenever I regained consciousness. But, since my memories are all pretty much hash, maybe I did suffer unbearable indigestion. I’d say it’s pretty doubtful, as one thing I do remember vividly is that I had a cast iron stomach and I could pretty much eat anything with impunity. That’s what I tell myself anyway, as I pop Prilosecs like they’re Tic-Tacs.

Finally, the beads and throws from the parades are pretty much as silly and useless as they were thirty some years ago, with the exception of this bad boy, which I’m going to wear every single day from now on. 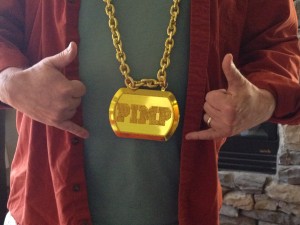 You can call me Pimp Mack Daddy, now!