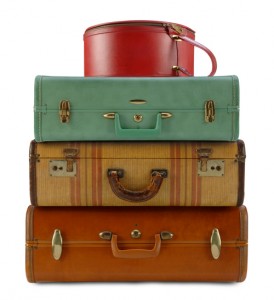 I have coined a term, Preppage, which is the period just prior to commencing travel where one figures out what one is going to pack. As Mary points out, preppage is not actually a word, in the conventional sense; conventional being defined as ‘in a dictionary’. Mary does that a lot, identifying examples of atrocious grammar, appalling spelling, and horrific pronunciation. That most of the examples she identifies come from my own writing and speech, is only bearable only because she’s trying to make me a better person. I know this because she tells me so. I think the difference between our two approaches are a result of her majoring in English at a prestigious liberal arts college while I, the untutored savage, matriculated at a state university best know for a football team and animal husbandry. Two things that have more in common than one might envision.

But as it turns out, I do know that preppage is not a word, at least not one recognized by the panel made up of officious professorial types, that I envision working on authorized dictionaries and the like. I’m sure there has to be such a panel, primarily because it’s a convenient way of sequestering away those self-same officious professorial types from the real world. Otherwise the professors would be wandering about and confronting guys wearing camouflage ball caps with slogans like ‘Git R Done’, and they’ll point out that ‘get’ is misspelled and ‘R’ is just a consonant and not an actual word. Then it all goes downhill from there, and before you know it there’s a couple of broken professor types and a guy named Butch with slightly skinned knuckles. Anyway, since this is my blog and it’s not like I’m making much money at it, I figured that as partial recompense I should have free reign to make up and use words of my own peculiar construction. Which is really difficult, I would have you know, because the automatic spellchecker thingy is always trying to turn words like preppage and the like into real dictionary approved words, so I have to try and trick it by adding an extra ‘s’ or something and then going back and deleting the s. It’s a pain but I persevere. Mary has pointed out that I can turn off the automatic spellchecking feature, but this is coming from the same woman who’s pointing out that preppage isn’t a real word so I’m pretty sure she has some sort of ulterior motive. Probably something to do with emphasizing the usefulness of English Comp Lit over Introductory Pig and Poultry Care and Management.

Preppage consists of a total of eight distinct phases, primarily because as an engineer (since I don’t much care for animals, Engineering was the natural next choice), everything is better when you break it down into phases. Sure, your typical liberal arts major will lump everything together in a huge jumble, like Pack Bags, but that only gives you one checkbox to check off, whereas my method gives you a total of eight checkboxes. Now doesn’t that sound like you achieved a lot more than just throwing some clothes in a bag? Of course it does, if you’re an engineer!

Phase 1 is The Counting. This usually entails a calendar and one or more hands with a minimum of four fingers on each, with which I can calculate to the nth degree of accuracy, the number of days we’ll be gone on the trip. Oh, and ‘nth’ as in nth degree, is engineer shorthand for saying, a numerical result between minus a lot and positive infinity, that is currently unknown. Engineers like to use terms like ‘nth’ and ‘currently unknown’ a lot, because it sounds really impressive to people that didn’t take their maths during college – like English majors.

Anyway, after we determine an accurate count of the total number of days we’ll be gone, we proceed to Phase 2. Phase 2 is known as the Determination. During the Determination, we figure out roughly what kind of things we’re going to be doing on the trip, and then create a list of all the different articles of apparel we’ll need, as well as subsidiary gear such as laptops, cell phones, sunscreen, water purifiers, karaoke machines and beer helmets.

Immediately following Phase 2, as you may already have figured out, is Phase 4, because, of course, we skip any numbers that are divisible by 3 and 176. I won’t bother explaining why we skip numbers divisible by 3 and 176, because I already described the ‘nth’ function, and that’s enough math for one day. Anyway, Phase 4 is the Realization. At this stage we Realize that we cannot do all the things we planned on doing because of various impediments. Such as a spouse who differs on plans to go windsurfing with nude models, no matter how cool it might be, even disregarding the fact that Richard Branson did it first. Because of this and other reasons, we start limiting the number of activities, and thus dispensing with items of apparel and gear that are no longer needed. Though I might point out that the naked windsurfing doesn’t actually require apparel (hence the naked), and one could probably rent the windsurfing equipment once you get to the destination. Questions about where I’m going to find the naked model can be seen as attempts by certain others to deflect me from pursuing adventure.

Phase 5, is the Sorting. In this phase, we look through our closet and determine if any of our clothes fit, are unstained, have all the buttons, a working zipper, and no hanging threads. Immediately following the Sorting we come to Phase 5.5, which is the Panicking. For instance, at the end of the last Sorting I conducted, I had a total of one pair of jeans, and a pair and a half of socks, that were deemed acceptable to be worn out in public, according to Mary. My standards are not quite as exacting, and I will try and get away with shirts with small, unobtrusive stains or pants with only a little bit of fraying at the hems. So the Panicking normally leads to a series of frenzied forays on-line to various purveyors of clothing and assorted accessories.

Phase 7, (because 6 is evenly divisible by 3, remember?), is the Fitting, the Disbelief, and the Defeated Acceptance. First, we try on our recent purchases, then we express disbelief that these clothes can be sized correctly, because we were sure that the last pair of pants we bought were size 36 waist, and there is no way we gained enough weight to require a size 40 waist. After Disbelief, we come to Defeated Acceptance, and order some more clothes, with the correct waist sizes or go naked from the waist down. Which would be perfectly alright, if I were allowed to indulge in a little naked windsurfing 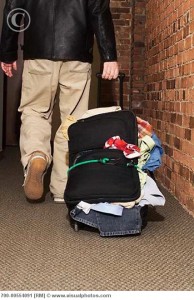 This man did not perform his Preppage correctly.

Phase 8 is the Packing. This never goes well. The amount of stuff we have piled up to load into our suitcases invariably exceeds the capacity of the suitcases by a factor of three, or more. And this is for winter travel. For summer travel it’s even worse, which at first you’d think was strange, but then you’ve never travelled with someone who believes a five gallon container of SPF 90 sunscreen is an essential. Of course in her defense, without the sunscreen, Mary has a tendency to combust when exposed to even a single ultraviolet ray.

After the Packing comes Phase 10, the Unpacking and then Repacking, which is repeated until such time that it becomes clear that no amount of zipper tugging nor jumping up and down on the suitcase is going to get it to close. Then comes the final phase of preppage – Phase 11, the Decimation. Just like the ancient Romans, we will sacrifice one in ten of the offending articles of clothing. Then comes the Ninemation, where one out of each nine articles of clothing is eliminated, and so on till you’re left with two pairs of shorts, a t-shirt, six mismatched socks and a dinner jacket, all of which will now fit in your suitcase, if a trifle snugly.

Now you’re ready to travel, but that’s a whole nother kettle of fish.