Posted on February 9, 2012 by Michael Waring

Over the summer, whilst we sat before a roaring fire and drank hot toddies as a frigid snowstorm beat against the windows (and before you dismiss this as hyperbole, we have snow well into May), we discussed our upcoming travels. Mary pointed out that among my many manifold failings, I neglected to record our adventures with any of those new fangled photography devices. She might not have used terms like failings, many, manifold, nor neglected, but the intent was clear, if only to one as supersensitive as myself.

Anyway, this last couple of months I decided I’d try my hand at taking more pictures while we’re gallivanting about. And after an epic series of trips, I got home, downloaded the snapshots into iPhoto, and sat back to admire some mad photographic skillz. We have a decent digital camera, but chose to run exclusively with the iPhone in order to pare down the number of electronic devices we were toting around. Not that, in the end, it would have made the slightest bit of difference. 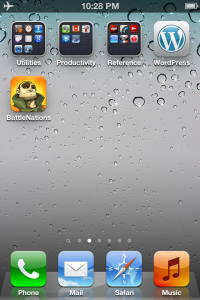 At least it's not taking a picture of my crotch

Most of the photos I took were out of focus, and when they were in focus, it was because I was taking a picture of something I didn’t intend to photograph in the first place. For instance, every third photo on my iPhone is a picture of the screen of my iPhone. And yes, BattleNations is an awesomely good game. This is some feature of the iPhone that I have, so far, been unable to turn off. 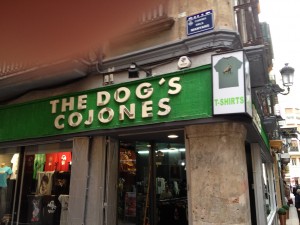 The photos that weren’t out of focus, like this one of a picturesque retail establishment in Valencia, suffers from compositional defects like the thumb obscuring the upper left corner. Or it might be a finger – who can tell? 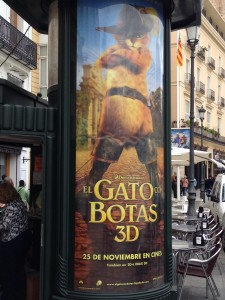 It's a symbol of Spanish culture, right?

In a similar vein, I continue to wantonly waste pixels on pictures like this movie poster, because for some strange reason, advertising it as Gato con Botas, instead of Puss in Boots delights me immensely.

In my defense, I find that when using the digital viewfinder, I cannot see more than a dim and fuzzy image. In bright sunlight, using the digital screen to compose my pictures is hopeless, and I’m better off just randomly snapping pictures in completely arbitrary directions. Mary, though ever helpful, demolished, carefully and exactingly, the battlements of my excuses. I had a box full of photos from eons past digitally scanned, and Mary through the liberal use of graphs and charts revealed that, even back in the old Instamatic days, extending through Point and Shoot years, and right up to the end of the SLR era, the majority of my photos were blurry and out of focus.

So Mary is now the official family photographer. Because PowerPoint presentations have a price. I will function, as I so often do nowadays as the loyal (to all appearances) Sherpa, carrying the gear and supplies needed on our treks through deepest, darkest wherever. And when another amazingly beautiful and richly historical vista presents itself, I will shout “Hey, there’s a tapas place on the corner!”